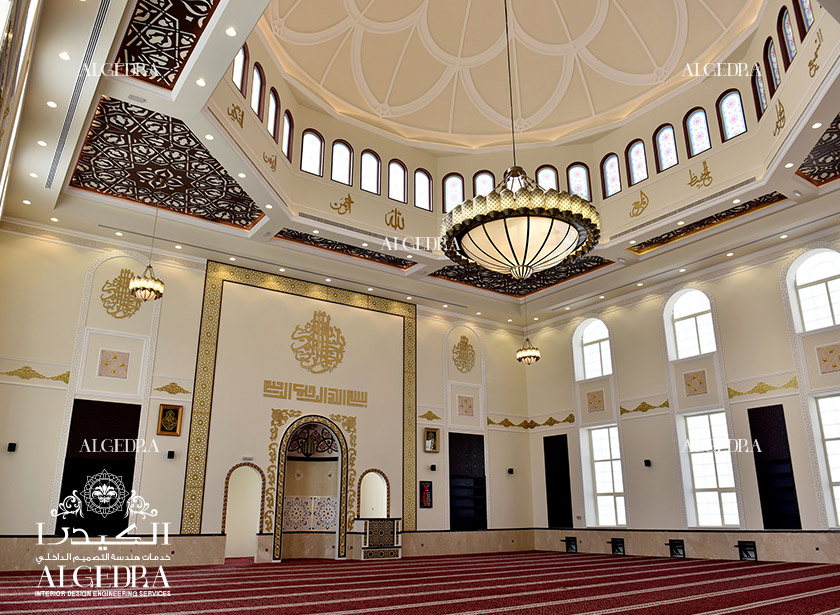 Algedra company recently added the final touches for a mosque’s decoration in Al Sharjah, the mosque capacity is for 1,500 prayers, have been built on the Ottoman Style, our team have discovered high creativity in mixing and harmonizing between the decoration elements from interior and exterior patterns that is holding the Arabian Islamic style,  shown clearly in its special curves and the beauty of its details, and the Arabic writing added to it an Islamic atmosphere that meets the requirements
Our main goal was to show niche’s wall with a design with different style using golden patterns and Gypsum patterns, in addition to hand drawings and some marble details in the niche, with concentration on the beauty of the ceiling design and specially  the dome because it’s the main attraction point in the mosques design, so the dome was covered in made of plants pattern we showed its beauty with hidden lightning.
We added to the ceiling wooden pattern to give luxury mixed with coziness, the hidden lighting played an important role in showing the beauty of the colors and the wood. We also used golden separations between the Men’s and women’s prayer area with adding some elements like Islamic style lightings.
For the place of ablution, the flooring is made of special materials to prevent sliding after making ablution, and the water tap is high a little to decrease the need of bending the back, that’s why nothing stopped our team from taking care of every simple detail no matter how small it looks, and in the sinks we used creamy marble for its beauty and special features, and some mosaic details on the wall, and for the main doors it was a mixture of wood with patters in it to show the Islamic style more and in a way that harmonize with the general mosque design.